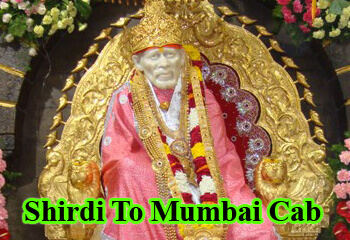 Pawar Travels specialize in providing our customer Shirdi to Mumbai car rental services.   Mumbai at a previous time called Bombay , is a densely populated city on India’s west coast. The total distance from Shirdi to  Mumbai is 241 km.   Mumbai  city is famous as the heart of Hindi Language. There are variety of places to visit in Mumbai like Haji Ali Dargah which is opened from 6:00am to 10:00 pm an Indo-Islamic architecture  with a height of 26 meter, one of the most placeable landmark of Mumbai.

The dargah contains the tomb of sayed peer Haji Ali Shah Bukhari. The Elaphanta Caves are a network of graven caves on Elephanta island.  The Hindu caves contain rock cut stone sculptures , representing the Shaiva Hindu sect dedicated to lord shiva.  Sanjay Gandhi National Park which consists more than one thousand species of plants, 40  mammals ,250  birds , reptiles and fishes . Siddhivinayak temple is a hindu temple dedicated to lord ganesha people mostly visit this temple on Tuesdays. Etched on the forehead of the deily there is an eye , which bear a likeness to the third eye of lord Shiva. Siddhivinayak is well known as “Navsacha Ganpati” amongst all devotees. The EsselWorld India’s largest amusement park which was established in 1989 . The Kamla Nehru park which coves an area of 4,000 sq.feet, it was  named after Kamala Nehru , India’s first prime minister, a place which is mostly visited by school children a bit different  way of entertainment a structure shaped like a shoe which was  inspired from a nursery rhyme.

Nehru Science center located in Worli , the center was started with the “light and Sight” exhibition . This  place  is named after the prime minister , Jawahral Nehru. Dr. Bhau Daji Lad Museum  it is the oldest museum in Mumbai situated in Byculla East which was originally established in 1855 and was later renamed in honour of Bhau Daji.  Shirdi to Mumbai taxi fair is as per km and depending upon the vehicle type.  The Worli Fort built by the british in Worli around 1657. Mahalakshmi Racecourse a horce racing track in Mumbai an oval track with 2400 meters straight chute spread over 255 acres of land.

Shirdi To Mumbai Cabs One Day Round Trip Package